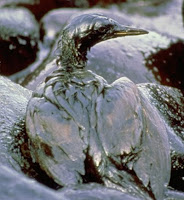 
Many healers I am in contact with are telling me that when they journey on behalf of the Gulf, and connect with different elements there, they are experiencing something they were not expecting. One woman, an amazing practitioner, said that she encountered a large bird that was unrecognizable for the amount of oil and sludge coating its feathers and body. in her journey, she embraced the bird and apologized for her part in causing this bird's agony and suffering.

She said that the bird also embraced her as well and spoke these words to her - "In the end, it is all right. See, I am light also."

What humans are experiencing is a completely non-judgmental, seemingly compassionate response from the creatures they are working so hard to save.

When Jesus asked that those who were causing so much suffering be forgiven, there were those at the cross who were bidding on the garment that was taken from him. He saw and knew the significance of events that were transpiring and the blindness of those to see clearly.

Even as the garment of the Gulf, that pristine beauty and bounty, was bid upon and exploited by the highest bidders, she understood that we simply did not grasp the extent of what our collective actions would ultimately do. And yet there is that compassionate response. "I bleed, yet forgive"

And amidst the travail of the cross, we can hear the words of hope spoken quietly and compassionately, "See, I make all things new."